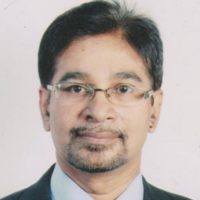 Firstly I would like to thank you all for your support and flowers for my Mum over the past few very difficult days. It has meant an awful lot to her to know that everyone is thinking of her at this time and a comfort to me knowing that she has everyone around her for the future. I am still not sure who will actually read it all out yet but I am going to do my best.

Balakisnan: Husband, father, son, friend, relative, colleague and sometimes a few other unmentionable names! But to me he was always just “Dad”, someone I took for granted would be around for a lot longer.

Growing up with him as a father was not always easy, but so what! Most things worth having aren’t easy and all the hard lessons in life he taught me are the ones I still remember now and learnt from the most.

We could argue and complain all we like, (well, actually we couldn’t as we weren’t allowed to), but it was not just “his way or the highway”. It was “his way” or “his way” and even if he didn’t follow the same rules he was implementing that was no defence as he would just say “don’t do as I do, do as I say”. End of conversation. But I wouldn’t change that for the world.

He was never strict, unless it was our education. He was a loyal friend, my confidant, my mentor. Everything was black or white. There were no grey areas with Dad. He wasn’t perfect but he was reliable, dependable and a man of strong principles. He was traditional, conventional, careful, and immensely private and family meant everything to him. Dad wasn’t perfect, but I wouldn’t have had him any other way. When times were hard, what we couldn’t afford he would build from whatever material he could get his hands on. He was a handyman for everything. From the leaking tap in the kitchen to patching up us siblings when we quarrel.

He could befriend, literally, anybody, and he did. But watch out, if he thought you were a fool… If there was one thing that he loved more than his family, it was his work. He took great pains and pride to be the lawyer he was. I remember walking in town with him, shopping or out for a meal – there were always people bumping into him, saying Hello! I used to complain saying even my private family time had to be shared. He would just laugh it off and say, that’s what he does. He helps people.

He was known for his love of art, and of music, and books. He was known for his knowledge, and his wit. Since his passing, my Dad has been described to me as many things: a real gentleman, a character, an intelligent man. He was all of these. He was also sharp, generous, resourceful, stubborn, and wickedly funny. I think those of us who knew him in the last few months of his life will agree, he kept that outlook right to the end.

If he were here today, he would be in the back nodding politely and smiling at everyone he knew. Maybe an occasional wave of hand or a friendly pat on the back.