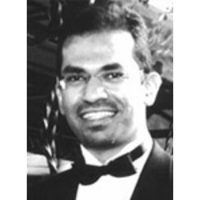 I first met Anandan Ganesan or Anand as commonly known, at the Roof situated in Bangsar. The objective was an interview. The procedure included several beers. I had invited him there to be interviewed for the position of Corporate Lawyer. I suspected he was interviewing me too, as a prospective employer. Whether judgments were mutually impaired by nights-end or not, from then onwards began our friendship and working relationship.

Anand joined Messrs Cheah Teh & Su on 1 September 2000. He was exemplary and took pride in his workmanship. His draftsmanship was meticulous. He read extensively and was knowledgeable in law and its application. This ability, he successfully married to his commercial acumen, a trait so necessary for lawyers. His meteoric career advancement, unparalleled in the Firm’s history, speaks for itself. He became Partner within four years, a process which would have taken others seven years if not more.

Anand, born on 7 November 1972 in Kuala Lumpur, was one lawyer in a family of doctors – Dr.S.Ganesan his father, mother Dr.Jeyanayagy and sister, Dr.Vijeya. From St. John’s Institution, Kuala Lumpur he left for England to pursue his A-levels. A straight A’s student, he proceeded to earn his Bachelor of Laws degree from the University of Bristol. He read at the Middle Temple, became a Barrister-at-Law and upon his return to Malaysia, was admitted as an Advocate & Solicitor on 16 August 1997.

Amongst colleagues, Anand was known for his penchant towards helpfulness and sharing of knowledge. His recourses, often given voluntarily with patience, replete with explanations and lengthy legal reasoning will be missed by many in the Firm.

With friends, Anand personified warmth and laughter. He drew upon an unending cache of jokes, unhesitating to make himself the object of his wit. Anand’s last get-together with the Firm was at Hard Rock Café. True to form, surrounded by chambering students, a colleague challenged him to name those students. It was then common knowledge that Anand’s engrossment in work made him oblivious to all else happening around him. Anand’s repartee, true lawyer thinking on his feet, was: “but of course I know all their names, this is ‘Sweetheart’, she is ‘Darling’ and this is ‘Babe’ ”. We applauded and laughed. That was the Anand we knew and will always remember by.

Anand made his very own hearth and home when on 15 September 2002 he married Menaka Rajasegaran, another lawyer. He departed when she was pregnant with his unborn child of five months. Their daughter, Anoshka Anandan was born on 10 November 2006. A good husband, he would likewise have made a good father. Anand was especially close to his in-laws Y.A. N.Rajasegaran, former Chairman, Industrial Court of Malaysia and his wife Bindi. Anand departed his life on 28 June 2006 at the youthful age of 34 years. For family, memories of Anand will remain forever. For friends, his companionship will be sadly missed. For those who knew him not, they will do so when they read of him at page 1534 of Lilly Industries (M) Sdn Bhd vs. Billy Wayne Selsor (2006)3 ILR 1507.

To my friend Anand – Rest in Peace.