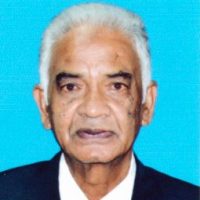 The late Ameenuddin bin Mohamed Ibrahim was born on 20 November 1947 in India and was brought to Malaya by his father who was a jeweller in the town of Seremban.

Ameenuddin received his early education at the King George V English School in Seremban where he completed his Senior Cambridge Examination. He was an outstanding student and took an active part in a number of extra-mural activities and excelled in hockey.

On 1 July 1968, Ameenuddin joined the Royal Malaysia Police as a Probationary Inspector and after his successful completion of his officer’s training, he was posted to Malacca Police Headquarters in the Special Branch Section of the Police Force. While in the service, Ameenuddin represented Malaysia at Hockey at the Olympics in 1968 held in Mexico and also the Asian Games held in Bangkok in 1970. He had represented the nation for over ten years in hockey and had been a source of great inspiration to the youth. Ameenuddin was dedicated and worked hard in the promotion and development of hockey in Malaysia and he proved to be a sportsman of outstanding calibre.

In 1980, Ameenuddin was acting Assistant Superintendent of Police attached to the Special Branch at the State Police Headquarters Negeri Sembilan, Seremban when he left the Police Force to study law at the then University College, Buckingham in the United Kingdom.

Upon completing his law studies in the United Kingdom, Ameenuddin returned to Malaysia and completed his CLP and joined a legal firm in Kuala Lumpur. Eventually he set up his own practice where he specialised in the practice of Criminal Law.

Ameenuddin was married and blessed with two sons aged 21 and 20.

Ameenuddin passed away on 10 November 2015 at the Wad Rawatan Koronari, Pusat Perubatan Universiti Malaya, Kuala Lumpur due to extensive myocardial interaction. He was made to rest on the same day.