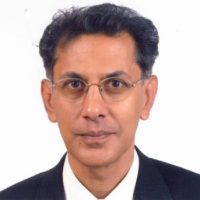 Ajit Kumar Hastir, popularly known by his family and friends as “Ajit” was born on 9 May 1954 in Kuala Lumpur. Ajit is the youngest son to Shant Kumar Hastir and Laziawati Hastir. He had his primary education in SK Brickfields and completed his secondary education at SMK Sultan Abu Samad.

After leaving school, Ajit joined MAS. As Ajit was working in the airlines, he enjoyed and took advantage of the benefits of travelling around the world. It was no secret that Ajit was indeed a very well-travelled man. While he was with MAS, he participated in marathons and was a respected long distance runner. Ajit was a man who was very focused and he always achieved what he set out to do.

Ajit became interested in law while he was with MAS. During his free time and off days, one could find Ajit sitting in one of the High Courts in Kuala Lumpur listening ardently to some of the proceedings. Eventually, Ajit decided to read law and did it part time with the University of London External Programme while he was still employed by MAS completing part of his law exams in Malaysia and his final exams in London.

Within three consecutive years, Ajit passed his law exams with a Second Class Honours and proceeded to sit for the Certificate in Legal Practice (“CLP”) Exams. Ajit passed his CLP Exams in 1989 at the first sitting while still in the employment of MAS. He then left MAS and started his pupillage in the law firm of Chooi & Company and was one of the few pupils-in-chambers who was retained after completion of his pupillage.

Later, Ajit left Chooi & Company and joined the law firm of Peters Chambers (formerly known as Watson Peters & Mohd Fuad) and after a short stint there, he decided to set up his own practice under the name and style of Ajit & Company.

Ajit was a very competent, honest and good lawyer who always put his clients’ interest and the interest of the Court before his own. Ajit was a well-liked and respected member of the Bar. He was meticulous in everything that he did and was a good advocate who could tell the difference between the wood and the trees.

Ajit practised commercial law, civil litigation in general and also had a wide range of experience in arbitration matters. He had an international arbitration clientele which included clients from Pakistan, India, Yemen and a host of other Middle Eastern countries.

Ajit was a devoted and loving husband and a dedicated and responsible father. He was also a devoted son, a reliable brother and brother-in-law and a much adored uncle to his nephew and nieces. He had a gift of interacting well with adults and children alike.

Ajit leaves behind his beloved wife, Belinda Lee May and two young and good looking sons, Aaron and Ashwin. His older son is a qualified engineer working in Singapore while his younger son is still studying in Australia.

Ajit’s passing is a great loss to his wife, sons, brothers and sisters, relatives and friends who truly respected him. It is also indeed a great loss to the Malaysian Bar.

When someone you love becomes a memory, the memory becomes a treasure – just as Ajit has.