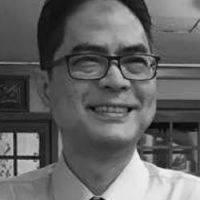 Let us remember the life of a marvelous man, Ahmad Husam bin Mansuri.

Ahmad Husam lived a wonderful life accompanied by his beloved wife, Azlina binti Abdul Majid, and their four children. Although he derived from simple beginnings, Ahmad Husam devoted his life to being a lawyer. He put his incredible efforts and determination throughout his university life to become a successful man. Every milestone achieved and hardship endured, had shaped the lovely character that we cherish until this very day.

He was born to Mansuri bin Shariff and Mariam binti Jaafar, on a beautiful May day in 1968. Ahmad spent his precious time in both Penang and Perak, surrounded by the ones he held dear. Later in life, his parents resided in Penang which then became a home to all. I would describe my father’s life as adventurous, exhilarating, and blissful.

Think of the warmest hug you can receive, that is how I would describe my father. He was undoubtedly an astonishing father, someone you could depend on, and outstandingly witty. He would empty his pockets for his loved ones, never once did I hear him saying “no” if I wanted something. The furthest he would go is, “Can we get this later?” he promised, and he kept it.

During the weekends, our family would have midnight hangout sessions. We would go out for dinner, at 11 at night, and spend the rest of the night strolling around Kuala Lumpur. Most nights were spent at Bukit Bintang, a bustling place that feels like home. Wherever we went, my father would be the protagonist in a story. He made jokes and entertained the company with his chucklesome stories. Ahmad Husam was indeed a lovely companion.

The last few days of Ahmad Husam were spent at Perak and Penang. He attended his first son’s graduation, Azzam, at Universiti Teknologi Petronas, class of 2020. I could draw it back from memory of how proud my father was to see his eldest graduating. This could be proven by the bouquet of flowers bought by him for Azzam, my father buying flowers was a rare occurrence.

The short trip to Penang is a memory I will forever keep close to my heart. My father was quite an eater, he managed to satisfy his cravings during the trip. We spent most of our time at Batu Ferringhi, wandering around the beach. My father truly seemed at ease, and I am beyond grateful he was able to feel such serenity.

Ahmad Husam’s departure from life was shocking and unexpected, yet he left his family with a chapter to reminisce and treasure.