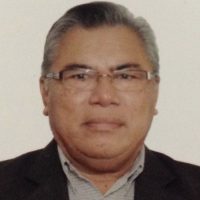 The late Abu Bakar Bin Abdullah was born on 3 April 1948 in Stulang, Johor Bahru.  He was the eldest of five siblings and the son to the famous International Football Legend; Abdullah Bin Don, nicknamed Harimau Malaya and Zaliha Bt Mohd Yusof. In his early childhood, he grew up in Jalan Dapat, Kampung Baru, Johor Bahru and started his education in Sekolah Rendah Larkin and Sekolah Rendah Agama Tambatan in Johor Bahru.

In his childhood, he always enjoyed playing football, influenced by his father.

He started his career in 1967 with the Registrar of Motor Vehicle in Johor Bahru and later joined the Royal Malaysian Police Force, which he served for 22 years.

In the Royal Malaysian Police Force, he held the position of Inspector and was attached to the Investigation Office in Pahang. Later, he was transferred to the Pahang Police Headquarters as Prosecuting Officer for two years.

Between 1975 and 1983, he was reassigned to the 7th Battalion Police Field Force in Tampin and assigned to various units in the Malaysia-Thai border to combat Communist Terrorists and had also been attached to Sabah Police Headquarters to combat piracy in the Sabah areas.

After eight years, he was reassigned to the Commercial Crimes and Logistics Department in the Police Headquarters, Bukit Aman until 1987.

After serving the Royal Malaysian Police Force, he wanted a career change.  In 1991, Abu Bakar Bin Abdullah was appointed as a Deputy Head Prosecutor in the Jalan Duta Courts, Kuala Lumpur specialising in prosecuting cases involving thefts, drugs and criminal breach of trust.  Then, between 1992 and 1993, he read in the Chambers of Messrs Kam Woon Wah & Co and was admitted to the Bar on 29 January 1993.

In 1993, Abu Bakar Bin Abdullah started his own practice in Kuala Lumpur and was the Senior Partner of Messrs Abu Bakar & Yong.

Throughout his life, he enjoyed golfing in his free time and spent most of the time reading.

Abu Bakar Bin Abdullah passed away on Friday, 5 December 2014 at 4:40 am.  He left behind his wife, Puan Rosni Bt Alias; a son, Mohd Hasery; and a daughter, Nur Atiqah Efara. He also left behind a daughter-in-law, Azurin Nawal and three grandsons: Iman Hezrin, Ilham Hezrin and Ikhlas Hezrin.